For Bering-uClibc 6.x there are several different disk image files available for download. These offer a choice of tailored variants of the same basic distribution and you should only need to download one of them - the one that best matches your requirements. The different variables are:

If in doubt then start with the first (most standard) option in each case - in other words the combination i486_syslinux_vga.

Image file(s) should be downloaded from the LEAF files area on SourceForge: http://sourceforge.net/projects/leaf/files/

It is advised to choose the latest available Bering-uClibc_6.x version.

Copying to the Installation Media

Copying an isolinux Image to CD-ROM

The CD-ROM Images (boot media type isolinux) are delivered as .iso files which must be copied to CD-ROM media using an optical media "burning" program. Alternatively and especially for testing purposes, a Virtual PC solution (such as qemu or Virtualbox) can boot directly from a .iso file.

The structure of the files and directories within the ISO image is as follows:

Install from CD-ROM to hard disk

Once you have created an ISO image file as shown above, you'll be able to boot from the ISO image. By default the Package hdsupp.lrp will be installed with all programs in place to format your already partitioned hard disk, install a bootloader and copy all files from the ISO image to the hard disk. It also makes the necessary changes to syslinux.cfg and leaf.cfg. The remaining step before reboot is eventually to toogle the bootable flag for your hard disk partition.

We assume in the following steps, that your hard disk is known as /dev/sda and you need only one partition.

Start the fdisk utility to partition your hard disk.

To create a new partition type "n", choose "p" for a new primary partition, "1" for the partition number, accept the default values for First and Last Sector. To change the partition system id to W95 FAT32, choose "t" and "b".

You may have a look before writing the changes to your hard disk with the command "p". It should show something like this:

Save your changes with the command "w".

To run the installation from CD ROM to hard disk, start the LEAF configuration menu with "lrcfg". Choose "i) Install to FAT partition". It will show the available FAT partitions:

Type "1" to select your partition /dev/sda1 as installation target.

Type "y", if you are shure and want to continue.

Again type "y", if you are shure and want to continue. Your storage device will now be formatted.

Usually you will and respond with "y". Wait until you are requested to press any key to return.

Step 3: Toogle the bootable flag for your partition.

Last step is to toggle the bootable flag for the partition /dev/sda1. Again run fdisk.

Print your partition table to screen with the command "p". It should look like this:

If the asterisk is missing below the Boot row, type "a" and "1" to make the first partition bootable, and save your changes with the command "w". Otherwise leave the fdisk utility with "q".

Reboot, but be shure, that you have removed the CD from the drive before it the boot process starts.

The following assumes that the flash media has been physically removed from the system which will be running Bering-uClibc 6.x and can be accessed on another Linux system using a USB interface such as a Compact Flash-to-USB adaptor.

For a standard Bering-uClibc 6.x installation, the flash media must:

Next you need to install the [http://syslinux.zytor.com/wiki/index.php/SYSLINUX SYSLINUX onto the boot partition. Open a command prompt and cd to your 'syslinux/linux' folder. Run:

replacing X with the device node of your media.

Install the MBR code on the flash media:

once again replace X with the device node of your media. This will write the Syslinux mbr code (mbr.bin) into the master boot record of the drive.

Installing SYSLINUX results in file ldlinux.sys being created in the root of the FAT32 file system. Do not attempt to edit or move this file since that will break the SYSLINUX operation.

For Bering-uClibc 5.x the Linux kernel and the SYSLINUX configuration files have been relocated to the syslinux/ directory of the boot disk. However, file ldlinux.sys should remain in the root directory (although by using the -d directory argument to syslinux this can be moved to a different pre-existing directory on the boot disk, if desired).

If the other requirements (i.e. the single, bootable, FAT32-formatted disk partition) are not met you will also need to use:

Note that this assumes the downloaded file is located in your $HOME/Download directory.

Do these extra steps if you are using the *_syslinux_vga.* images

Because all *.c32 files shall match the same syslinux version, and if you don't know which syslinux version was used to generate the distribution c32 files, copy hdt.c32, menu.c32, vesamenu.c32, libcom32.c32 and libutil.c32 files from the SYSLINUX program you used to create ldlinux.sys to ./syslinux directory of your mounted flash media.

They can also be found in /usr/lib/syslinux/modules/bios on Debian Jessie.

An easy way to find these files is to:

Note: You don't have to do anything if you are using the *_syslinux_serial.* images since they do not use these *.c32 files, so there will be no version conflicts.

Remove the flash media from the Linux PC and proceed to the next Chapter.

Note: This has only been tested with syslinux version 6.03, therefor LEAF Bering-uClibc 6.1.3 or later is required

This section describes how to create a multiboot setup with Syslinux bootloader. That way you'll can either have two partitions with the same setup to always have a working setup when updating the router with a new version or to have different setups side-by-side.

It is assumed that you use an ISO Image (/dev/sr0) to start with, but it will also be possible to install from an USB stick (e.g. /dev/sdb), if you install the Package hdsupp.lrp. The recipe is given for a graphical display, changes needed if the LEAF router only has a serial console read the section 3.4.7 "Syslinux setup for a serial console".

The disk layout will be:

You need to have a syslinux bootloader on all partitions and chainload from /dev/sda1. This is a restriction by Syslinux not being able to load a kernel and initrd from another partition without chainloading.

We will create a boot partition on /dev/sda with 4MB of size, the two data partitions /dev/sda2 and /dev/sda3 with 200MB each.

To create the partitions run

Repeat for /dev/sda2 and /dev/sda3 but change the partition number and choose +200M instead of +4M.

With the command p (print) you can see if everything is as expected. There should be three partitions of type "Linux", where the first is marked bootable with an asterisk.

Save your changes with w.

The first (boot) partition will be formatted with vfat; the remaining data partitions with ext4. Currently extlinux does not support 64bit ext4, therefor we need to be careful with format command and disable the 64bit feature. To manually disable the "64bit" feature when creating ext4 volumes, use -O ^64bit in the mke2fs (or equivalent) command. That is, an hyphen, immediately followed by an upper-case letter "O", a space character, the caret "^" symbol, followed by "64bit" (no hyphen).

Before moving on you may create for your convenience a second mount point to mount the data source (here the ISO image /dev/sr0) until the following tasks are finished.

Finally the boot menu will be created. Again mount /dev/sda1 to /mnt and copy the necessary files from the data source mounted on /dev/cdrom. In case you use a USB stick instead of the ISO image the source will be syslinux instead isolinux

The boot menu will be in /mnt/syslinux/syslinux.cfg and should look like this:

The boot menu can be copied from /cdrom/isolinux.cfg renamed to /mnt/syslinux/syslinux.cfg

Install LEAF to the partitions

Mount /dev/sda2 to /mnt, copy the files from data source and disable PKGPATH in leaf.cfg.

The PKGPATH in /mnt/leaf.cfg needs to be commented and changed to

Unmount /mnt and repeat this step for /dev/sda3.

Unmount /cdrom and reboot. If everything went well, you'll be able to boot from /dev/sda1 and then to either boot /dev/sda2 or /dev/sda3.

Syslinux setup for a serial console 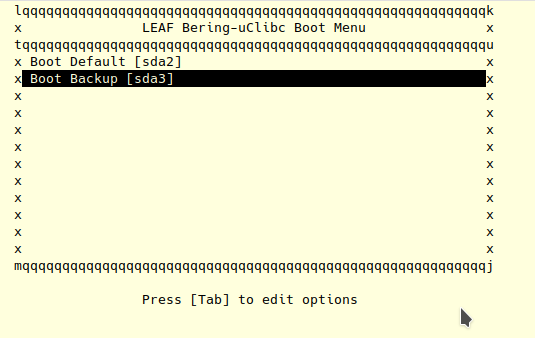 Finally the boot menu will be created. Again mount /dev/sda1 to /mnt and copy the necessary files from the data source mounted (usually /dev/sdb, we assume it is mounted on /mnt2, which needs to be created first). The source files will be in /mnt2/syslinux.

The boot menu (TIMEOUT set to 20 sec) will be in /mnt/syslinux/syslinux.cfg and should look like this:

Copying a pxelinux Image to a Network Boot Server

Note: pxelinux boot support is currently under development and is not yet available in the standard Bering-uClibc 6.x downloads.

Much of the complexity of a pxelinux installation is associated with setup of the DHCP server that delivers the PXE boot filename, the TFTP server that delivers the initial boot image etc. These are not specific to Bering-uClibc 6.x and so are not covered in detail here but some guidelines and pointers to other sources of information can be found in the Network Booting Appendix.

The Images suitable for network booting (boot media type pxelinux) are delivered as .tar.gz files which must be extracted onto suitable file server(s).

Bering-uClibc 6.x supports a number of different file sharing protocol options for network boot and installation (or at least it is planned to). These are:

For the purposes of this document it is assumed that TFTP will be used only to deliver (g)pxelinux.0 and pxelinux.cfg/default and that an HTTP server will be used to deliver the remainder of the files.

It is assumed that you know how to configure your DHCP server for PXE booting. See the Network Booting Appendix for some Hints and Tips.

In summary, the DHCP server needs to: